The Grand Lodge of the Daughters of Norway was founded as “Daughters of Norway of the Pacific Coast” (DNPC) on February 20, 1908, by the three independent lodges existing at that time:  Valkyrien Lodge #1 of Seattle (1905-), Embla Lodge #2 of Tacoma (1907-), and Freya Lodge #3 of Spokane (1907-1923), all in Washington State. Members of each lodge signed Washington State letters of incorporation. The organization's bylaws provided for a governing body, which is the Grand Lodge, to hold annual conventions. This would promote social and cultural exchange among its members. Business was conducted relating to governance and maintenance of the modest fraternal burial fund that existed at that time for the benefit of individual members. All convention and lodge meetings were conducted in Norwegian.

Norwegian immigration to the United States in the early 19th Century grew steadily by the mid 1800's until the early early 20th Century. By the late 1800's Norwegians, along with many other immigrant groups, formed organizations to provide mutual support and interact socially. By the end of the 19th century, three organizations had been formed - the Sons of Norway of the Midwest (first starting in 1895 in Minneapolis, Minnesota;  the Sons of Norway of the Pacific Coast (started about the same time in Seattle, Washington) and the Daughters of Norway of the Midwest in 1897 in North Minneapolis, Minnesota. 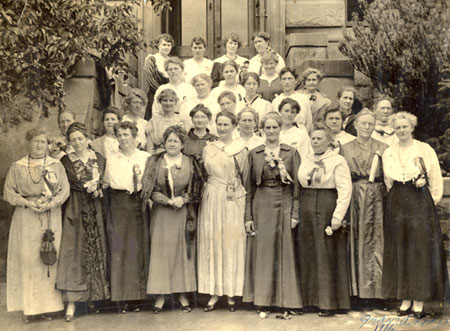 The newly incorporated organization grew, adding new lodges in Washington and other western states. By 1910, some Sons of Norway lodges started admitting women. This direct competition, coupled with the merger of the two Sons of Norway groups in 1910, affected recruitment efforts of DNPC and their midwest counterpart. The DNPC responded by doubling their efforts and organizing twenty-one new lodges between 1909 and 1914. However, by 1919, the Sons of Norway began making inroads into the DNPC membership when some DNPC lodges began joining the Sons of Norway.

The DNPC was affected by both World Wars. As a result of WWI's accompanying deprivations, the DNPC did not hold their annual convention in 1918. The organization was active in supporting the war effort by supporting relief agencies and the American Red Cross. Between wars, the DNPC initiated changes. In 1926, DNPC conventions became biennial. At the 1930 convention, membership was opened to women married to men of Norwegian ancestry. In addition, a proposal passed that would allow translation of installation ceremonies into English in cases where the candidate did not understand Norwegian.

In 1931, DNPC recruited Thelma Lodge #26 of Everett, Washington, the only Daughters of Norway of the Midwest lodge located in the West, to join them. Two additional lodges were added during the interim war years.

At the 18th Grand Lodge Convention held in 1932, Memorial Service was held for sisters who passed. This service is now a tradition at our conventions. By 1936's convention, DNPC delegates approved the translation of the Ritual and Constitution into English, and also approved the founding of a newsletter to improve communication. The newsletter, Døtre av Norge, was written in Norwegian and first published on Dec 15, 1936. Further movement toward use of English in the organization occurred during the 1942 convention, when delegates approved "the lodges that find it necessary to use the English language in their meetings are allowed to do so, even though the Norwegian language will still be the official language of the Daughters of Norway."

World War II motivated the Daughters of Norway to help with the war effort in the US and in Norway. Despite being a neutral country in the conflict, Norway was invaded by the Germans in April of 1940. Norway suffered considerable hardship during the war years and many Norwegian-Americans were active in helping the Norwegian Resistance movement. The Daughters of Norway lodges supported the war by helping the Red Cross and other relief agencies. In addition, some lodges spearheaded a drive to supply aid to the Norwegians when the war ended. Many Daughters of Norway members received medals for their war relief and resistance efforts by the Norwegian or Danish governments.

In 1950 the Sons of Norway renewed their efforts to incorporate Daughters of Norway groups into their organization. Although the Daughters of Norway of the Midwest voted to merge with the Sons of Norway in 1950, a similar proposal at the DNPC 1950 Convention was soundly defeated. During this convention, delegates also approved changing the official convention language from Norwegian to English and the Norwegian language Døtre av Norge newsletter began issuing English supplements. Eventually the Norwegian was dropped and the newsletter was written solely in English.

Between 1985 and 2002, Daughters of Norway made several changes to modernize lodge operations. These included: streamlined the application process; dropped use of passwords; opened meetings to guests; added an Associate Member category; and changed the Døtre av Norge newsletter into a newspaper format with additional articles of cultural or historical interest.

Since 1985, in response to a growing interest in the organization, the Grand Lodge of the Daughters of Norway has formed many new lodges in California, Nevada, Western Washington State, Iowa, Idaho, Minnesota, North Dakota and Oregon. In 2006, D of N broadened its base to the Midwest when Eva Nansen Lodge #46 of Des Moines, Iowa joined the organization.

The following year, 2007, D of N continued to expand into new parts of the country with the institution of Helga Estby Lodge #47 in Mountain Home, Idaho. In 2009, two new California lodges (Elise Wærenskjold #48 of Roseville and Hulda Garborg #49 of Rainbow) and one Washington lodge (Freya #50 of Spokane) were founded. By Sept. 2010, a lodge was formed (Pauline Fjelde #51, Minneapolis/St. Paul, Minnesota) in the place where the first Daughters of Norway (of the Midwest) began in the late 1800's. The Agnes Mathilde Wergeland lodge #52 was formed in Junction City, OR in 2011. The Rosanna Gutterud Johnsrud lodge, #53 of Fargo, North Dakota was formed in October 2014. Borghild Dahl Lodge #54 formed in 2017 is located in Sioux Falls, South Dakota.  North Dakota formed the Mina Aasen Lodge #55 in Minot, North Dakota in 2018. Today, we have more than 1,700 members.