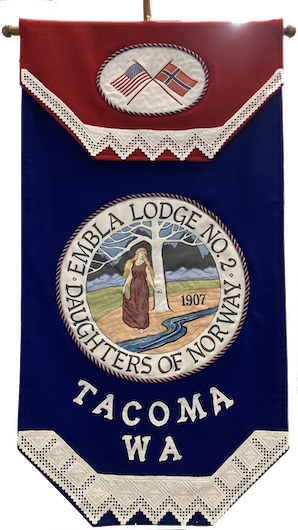 Embla was chartered by the Sons of Norway of the Pacific Coast over 100 years ago. The lodge joined with Valkyrien Lodge #1 of Seattle and Freya Lodge #3 of Spokane to form the Grand Lodge Daughters of Norway on the Pacific Coast on February 20, 1908. Embla Lodge helped co-found the Scandinavian Heritage Festival. This event has evolved into the annual Nordic Festival (first weekend in October). The Nordic Festival is held at Mt. View Lutheran Church in Edgewood, Washington.  Embla also participates with other local Norwegian organizations to plan the annual Norwegian Heritage Festival, held on the last Saturday of April at Pacific Lutheran University (PLU). The lodge offers a variety of Norwegian cooking classes at PLU. In addition to the varied Norwegian cultural programs and parties offered at lodge meetings, Embla Lodge has various craft groups.

A few of the many popular programs the lodge has offered are:

Embla Lodge was named for the first woman of the human race according to Norse Mythology. Askr and Embla are to the old Norsk religion what Adam and Eve are to Judaism and Christianity. Askr (Ask) and Embla were created from two trees on the seashore by three gods, Odin and his two brothers. The first god gave them life, the second understanding and the third their outward appearance.