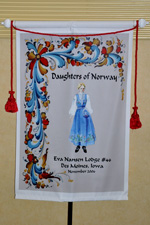 Origin  Scandinavians began immigrating to Iowa as early as the 1830s and 1840s where they settled mostly in central and northern Iowa.  According to the 2000 Census Bureau, Iowa’s Scandinavian American population is 338,161 or 11.5%;  LINK: http://en.wikipedia.org/wiki/Scandinavian_American

Eva Nansen Lodge #46 became the first Iowa lodge to bear the name Daughters of Norway on November 5, 2006 with forty-six charter members representing Norway, Denmark, and Sweden ancestries.  It is a 501c-8 non-profit organization.  Lodge Sisters Velkommen guests to attend any lodge gathering held the first Tuesday of each month except February, June and July.

Membership Opportunities  If you would like to join the Daughters Of Norway’s Eva Nansen Lodge 46, click contact to receive additional information and an application form to bring it to the next Lodge gathering. Membership is available to:

About Us  Monthly lodge gatherings are guided by a thirteen member board elected each November and installed in January.  Lodge Sisters freely volunteer their talents and services throughout the year by serving on committees, hosting, program presentations, and providing delicious Scandinavian and American foods.

Discover Your Nordic Heritage  Throughout the year the lodge welcomes guests and families to celebrate (May) Syttende Mai, and (Dec) Julefest ; in October sisters sponsor Taste of Norway that’s open to the public. The first weekend in December, the Lodge Sisters participate in the Christkindlmarket Des Moines where they decorate a Norwegian theme tree for the Silent Auction. Sisters actively partake in special events hosted by Des Moines area Sons of Norway, Danish and Swedish groups. In even years, sisters attend the Daughters of Norway biennial convention.

Daughters of Norway Sister demonstrates how to make lefse at Taste of Norway!

The lodge's Nordic programs have included

Lodge 46 was named in honor of famous Norwegian romance opera singer, Eva Helene Sars Nansen (born Dec 17, 1859 in Christiania, Akershus, Norway and deceased Dec 9, 1907 in Lysaker, Bærum, Akershus, Norway).  She was the youngest of 21 children of Michael Sars and Maren Cathrine Welhaven.  At age 28 Eva left for Berlin to study opera with a contemporary of Tchaikovsy.  Eva knew Norwegian composer Edvard Grieg and she performed his music beautifully.  Eva was relatively short, but very athletic and became a pioneer in mountain and cross country skiing.  She was a smart and practical woman and realized the need for women to stop wearing only dresses while practicing the sport.  Thus, she became the first woman in Norway to wear “trousers” while skiing!

Eva married ski pioneer, famous Norwegian explorer and scientist, Fridtjof Nansen on Sep 6, 1889.  They were a very “modern” couple, both continuing their individual vocations after their marriage.  Eva not only continued to sing in operas at home and in other parts of Europe and Scandinavia, but she also gave lessons when at home.  At the age of 49 (1907), she sang in a final concert at a well-received performance in London.  Not long afterwards that same year, Eva died suddenly of pneumonia.  That left her husband a widower with five relatively young children to raise: Liv (14), Kåre (10), Irmelin (7), Odd (6), and Åsmund (4).